Our Director of Sales, Ryland Ferguson, will be on the road working remotely for the next couple months. While on the road, he has shared some of his sales lessons along the way.

After traveling through Indiana, the Mammoth

Caves outside of Bowling Green, Kentucky, and enjoying country music with friends in Nashville, I find myself in Memphis, TN – home of the blues, BBQ, and Elvis. Not too bad for a couple weeks.

The trip so far has lead me to today’s obvious metaphor source, which comes from the Mammoth Cave trip. Mammoth Caves National Park is home to the world’s longest (known) stretch of connected caves, covering over 400 miles underground. During my time there, I think I covered about ONE of those miles. So where does the sales insight come in?

The history of the caves is an interesting one as initially they thought the caves were only a few miles long. Almost 200 years of exploration slowly revealed not only new passageways, but other caves systems that connected from two other entrances over 100 miles from the historic entrances. People in the early 1900s were going down there with oil lanterns and probing and mapping the caves, squeezing through 7 inch high holes, wading through underground rivers, and meticulously and patiently exploring further and further into the darkness.

“OK, get to the point?” Fine, but it’s raining today so I’m taking my time. 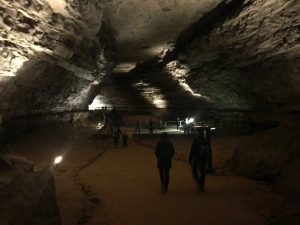 The point is this – as I watched and read about these explorers, I thought it was an apt analogy for the start of a new quarter in the world of sales. You made it to end of Q1. You think you know what you’re doing, and you’re going about things today more or less the same way you were in late March. Here’s the problem – if you do that, you’re going to keep thinking you found the end of the cave, and miss the other 400 miles that someone else will find. You have to keep probing, keep improving, keep changing. If you approach today the exact same way you approached things in Q1, you can more or less expect the same results. I don’t think any of us would say we’d be hard pressed to improve on our Q1. Keep the things that worked for you, but keep going further as well.

As we hiked, we saw some deer in the woods that surround the caves that were so used to humans that I was about able to touch them without scaring them. Though it was cool for me, but all I could think was how I didn’t want to be like that deer. I don’t want to get so used to my environment and my routines.

So I’m inviting you to shake it up. Keep probing. Don’t accept that Q2 will look just like Q1 or that you have no say in changing it because sales is a fickle business. There’s miles of opportunities to be explored and they’re waiting for someone else to come along who refuses to accept the status quo. Take a different approach this quarter and see how you can improve. How will your end of quarter in June look different because of what you were willing to explore today?

That’s it folks. I’m gonna hope the rains stops before the Mississippi swallows my rig. It’s a big river, but I think I can take it. Stay tuned next week for national parks in Arkansas!